June 21, 2010 Anadarko Petroleum (APC)
If there is one company that could see serious permanent damage from the Macondo oil well disaster in the Gulf of Mexico, it's likely not BP, but, instead, is Anadarko Petroleum (APC). Anadarko Petroleum is the minority owner of the well (25% ownership) and it may be on the hook for as much as $6 billion. However, unlike BP, which self-insures, I believe Anadarko has external insurance (not 100% sure.) Also, most importantly, Anadarko is a smaller company and is a pure E&P (exploration & production) so it will be hurt by the deepwater drilling ban (it does own properties elsewhere but Gulf of Mexico is important.)

Regardless of what happens to any of the involved companies, the environmental disaster will alter the oil & gas business. I suspect companies won't be allowed to drill in deepwater without some backup plan to handle disasters in the future.


The partnership [between BP and Anadarko] could cost them up to $6 billion dollars, according to a recent statement by Fitch Ratings. Based on that estimate, Fitch downgraded Anadarko (APC, Fortune 500) from "stable" to "negative." The $6 billion could be conservative considering many of the estimates for BP's total costs are $35 billion or higher. Anadarko has already lost $8 billion in value because of its ties to the well where the exploded Deepwater Horizon was drilling. Anadarko's plight could make other small oil companies think twice about entering similar partnerships in the future.


Anadarko signed a contract saying that it would have to pay a quarter of the costs associated with the well, unless BP (BP) is found guilty of gross negligence, even though no Anadarko employee has worked on the rig.


...
A non-operating partner pays money up front for the well, approves the drilling plans, then leaves the rest for the operator. Anadarko Petroleum Corp. was one of two non-operating investors on the Macondo well-the other was another an arm of the Japanese conglomerate Mitsui.


The cash flow at Anadarko isn't that great as the following cash flow data from Morningstar indicates: 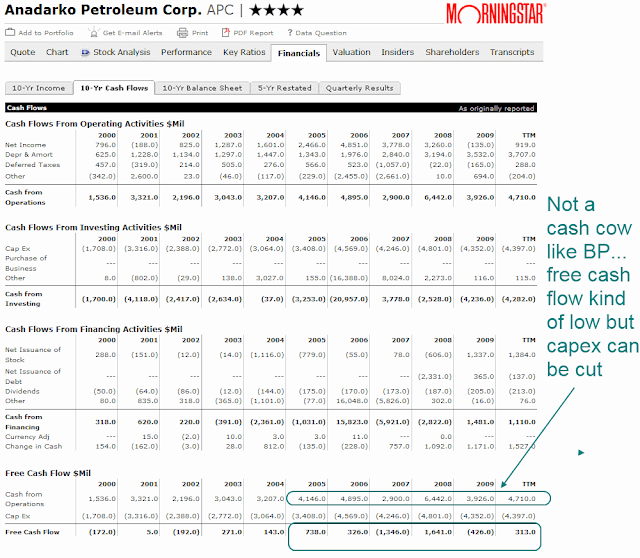 Free cash flow is very low but that's because, like most oil & gas companies, Anadarko has been spending money drilling for oil. Even if it cuts capex, its cash flow can barely pay off $6 billion in damages over a few years. If oil prices fall, things would be even worse. However, it does have more than $3 billion in cash right now.

Fortune points out that Anadarko has several ways to avoid paying the damages:


Two scenarios could bail Anadarko out of the mess. One would be that BP is accused of gross negligence, which would be tough to prove in court, said Heikkinen, and could take years of litigation to decide. The other scenario would be that the Macondo well stops gushing today, making the damages fee more manageable. Then BP would be less likely to call on everyone else to pay.

The worst-case scenario, according to Wells Fargo analyst Dave Tameron, is that the relief well that BP is drilling doesn't work. Along with continuing to pollute the gulf, that would mean that BP's liability could get astronomical. The company would be more likely to point fingers to help bear the brunt of the cost.

Anadarko is also attempting to eliminate some contracts it had signed:


Anadarko rents four rigs in the gulf from different companies. It's issued a force majeure to three of those companies, and kept one rig running to do non-drilling operations, mostly maintenance work.

A force majeure means that Anadarko opt out of its drilling contract due to forces outside of its control. In this case, the force outside of its control would be the drilling moratorium issued by the US government. This would enable Anadarko to pay each company a cancellation fee of $30 million to get out of the contract, which would ultimately save them money. Rigs in the Gulf don't rent cheap-they're about a million dollars a day.

One company is contesting Anadarko's force majeure: Transocean (RIG), owner of the destroyed Deepwater Horizon, but also several other rigs in the gulf. Depending on how the legal process shakes out -- and it will probably drag --Anadarko could be stuck paying rent for a rig banned from drilling.

Anadarko relies heavily on the Gulf of Mexico operations but it does appear to be diversified:


Anadarko is still the largest independent deep-water producer in the Gulf of Mexico. It has 11 producing platforms in the Gulf, and it operates eight of those. Anadarko can still bring in oil from those platforms; it just can't drill new wells. The company had said that it still expects to pull its forecasted amount of oil in 2010 -- about 230-234 million barrels, much of that coming from producing wells in the Gulf.
...
Anadarko has projects in Brazil, Algeria and Ghana, to name a few. The one in Ghana, called the Jubilee project, should pull in 60,000 barrels a day from the area if it meets estimates. Anadarko expects to start drilling in October, and pull in revenue beginning in 2011.

Anadarko also has onshore assets, and assets in shale. It just signed a $1.4 billion deal with Mitsui, the other co-owner of the well for Marcellus Shale in Pennsylvania.


Anyway, the reason I'm writing about Anadarko Petroleum is because it may be a contrarian opportunity worth investigating. The market is likely to sell this company off more than many others (because it's the largest independent deep-water producer.) I think if the situation deteriorates, or the uncertainty doesn't get resolved for months, it may be worth looking at this stock.

If you are bearish on commodities, like I am, you also need to consider the possibility of oil prices declining.